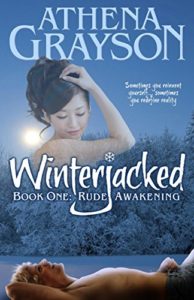 An Otherworldly mid-life crisis…
Jack Winters seems to be living up to his name. His marriage started out smooth as an ice rink, but ended in frosty civility. Rather than burden his friends with his mess of a life, he’s frozen out the people who know him best, including the old flame who never quite caught fire. But she’s back in his life, and what could have been is now becoming real…right when an unreal family legacy might bring it all
crashing down like an avalanche. Is there a chance at ordinary happiness for someone having an Otherworldly mid-life crisis?

Book One in the WinterJacked Cycle
To the young, impossible dreams are magic. At forty, they’re a mid-life crisis. Lin Sanada thought she was long over her college crush and the missed connections that kept her and Jack Winters “just friends” for nearly twenty years. She’s moved on, and left wishful thinking behind. But when a winter night, a full moon, and a little magic lead her into a very real relationship with the man of her dreams, she finds a reality far more fantastical than her wildest imaginings…

Sometimes you reinvent yourself…Sometimes you redefine reality.
If Jack wants to earn a new chance at a future, he’ll have to confront all the raw wounds failure left on his expectations. And he’ll have to
choose: keep clinging to the shreds of his old life…or make a whole new reality.