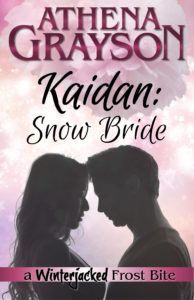 He went looking for ghost stories. She IS a ghost story. And she’s captured his heart.

A snowstorm forces a wounded American soldier to find shelter in a remote Japanese ryokan. The snow witch can only have him for a single night, but the foreigner thaws her icy heart so completely that she will defy a thousand years of tradition to become not only his bride but his wife.

Before the draft, Spencer spent his life studying folktales, and Uncle Sam put him to work using that knowledge to scare the enemy in the jungles of Vietnam. But when an injury takes him out of combat, hospital healing isn’t enough to exorcize the ghosts that haunt his dreams.

A mountain storm brings hapless travelers to her inn, but Yukiko is no ordinary hostess. The American soldier can only be hers for one night, but her heart wants more. The snow bride must break her curse if she hopes to become not only a bride but his wife.