Someone’s in an anthology with some stellar luminaries of SFR!

That someone would be me, in case you were wondering. I’m pleased to add one small part of the SFR Shooting Stars’ latest anthology: Cosmic Cabaret! 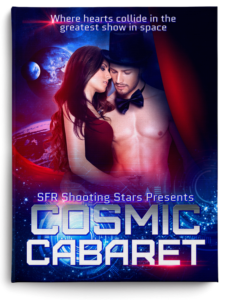 Where Hearts Collide in the Greatest Show in Space

Come aboard Blue Star line’s crown jewel, the LS Quantum, a luxury starship traveling through space and time. Join thirteen USA Today, Amazon best-selling, and award-winning speculative fiction romance authors as they twist their own tales on the decks and in the dance halls of LS Quantum. Embark on a journey to fall in love at the Cosmic Cabaret.

My contribution is Forbidden Alliance: A Tale of the Scions of the Star Empire.

Society tore them apart once. It’s going to take brain surgery and rocket science to put them back together.

Landing an engineer’s job on the LS Quantum is Milady’s once-in-a-lifetime chance to make a fresh start away from the past she can’t remember. When a hotshot drive designer triggers fragmented memories of that past, she must find the truths in a ship notorious for its illusions.

Thann Zalco stopped caring about anything but stardrives when he lost his love two years ago. Finding her aboard a luxury cruise vessel isn’t the reunion miracle it seems when she can’t even remember him without dangerous brain surgery. Worse, the cabal that first tore them apart is determined to make their separation permanent.

The hush that had captivated the audience during her performance remained that way for almost thirty seconds as the last scent and the last lingering sparks from the light show flared up, fizzled out, and faded, leaving afterimages burned into the spectator’s eyes as a parting gift.

As she touched down, the silence swelled into a murmur which erupted in thunderous applause. The gravity field returned to normal, allowing her costume to drop to her sides, and she remembered to take a bow, even though her heart ached to be up in zero-gee once again.

In the sudden absence of the lights of the show, she could see the faint glow of the house lights illuminating the exits and the private boxes where the VIPs were located. She lifted her eyes to the top right box and met the eyes of the man sitting there. Even from this distance, she could see his silvery gray irises, or perhaps she just remembered from their time in the stardrive trough. Something drew her. She narrowed her eyes, trying to see more of his face, the lower part of which was cast into shadow. Something pulled her gaze back to that box again and again. The applause took on a rhythm of peaks and valleys, something that shook the stage beneath her feet.

She took a second bow and when the music queued up for the next act, her back teeth started to itch. She darted across the stage towards the exit, sparing one last glance toward the VIP box to see him lean forward. But the itch in her back teeth turned to a thrum, and she knew it wasn’t just the music or the audience.
It was the ship itself.

For a minute she thought she saw him say something as he rose from his seat. Suddenly, she couldn’t see the stage in front of her. She could see the structures all right, stage, the props the wings, all faded out to a dim and distant series of shadows as she remembered something about that mouth. The curve of his lips as he smiled? The way his jaw moved as he formed a word she could not understand. It was right there, just on the tip of her tongue, teasing the edge of her memory —

Your next stop on the SFR Brigade Showcase awaits!

Privilege is a Prison

The heirs of Landfall’s powerful nobility have all the wealth and privilege of their family status, but there’s only one thing that will give them control over their own lives–the title of Scion. The only way to earn it is by carefully managing the social influence markets that rank them according to their accomplishments. At the exclusive Landfall Cultural Academy, the heirs vie to elevate their status high enough for the Cultural Trust to grant them the title and the freedom to make their own way. In this elite competition, scandal is as good as scholarship.