I’m trying something new here. From the time I first launched Huntress as a serial in 2015, I’ve been dumping a LOT of information into my brain about marketing, social media, book launches, series launches, what works, what doesn’t, and what will suck your money out of your wallet like a pool filter sucks out junebugs. I won’t lie and say I haven’t learned anything–I’ve learned a buttload. 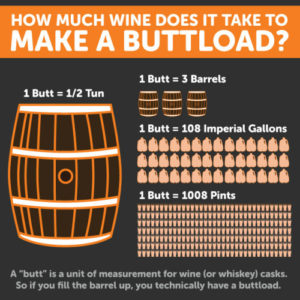 In fact, I’ve also learned that a buttload is a real, honest-to-Dog unit of measurement. Infographic courtesy of Brad Chmielewski at Digital Hitchhiker.

108 imperial gallons of information is a lot to process. And unlike wine, not all marketing information gets better with age. Some of it’s even skunked from the beginning. Also like wine, large quantities of it can be a false refuge of desperate people.

Tangential to brewing is distillery. I used to work in a distillery, and the tanks of corn mash are huge and they stink and there’s a ton of crap floating in liquid. Only after the distillation process is complete and all the crap is filtered out do you get liquid that is still barely potable. You still have to put it into a barrel (oh, who am I kidding, I can’t let that one go) You still have to put it into a BUTT (there I said it) and let it sit there in a warm dark place before it turns into something you’d put into a glass and drink.

2018 is the year of distillery for me. Not that I’m going to end up soaked at the bottom of a BUTT and smelling like a distillery (although I haven’t NOT entertained that possibility), but rather that all the stuff I’ve been cramming into my head needs to be shoved into a BUTT and stacked in a warm dark place while it ages and the crap settles to the bottom, below the bunghole (I HAVE NO REGRETS!).