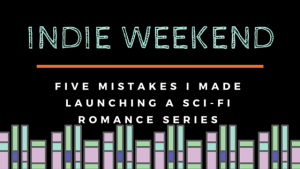 I came away with more than a few sobering lessons from putting the Huntress series out there into the world. I wouldn’t trade the creation aspect for the world, but I did have a pretty big learning curve with the business side of things. So in the interests of full disclosure, here are my biggest “lessons learned.” Learn from my fail, folks.

The great thing about indie publishing is that none of my mistakes are real deal-breakers. Even the boneheaded move that I made back during release when I forgot to check the “Enroll this book in Kindle Unlimited” box for Episode 10 (or when I uploaded the wrong file and it came out gibberish for that same episode. Clearly, that week was when my exhaustion started showing). I missed my launch window, but I can schedule a “re-launch,” and this time make a better marketing plan. Kindle Unlimited is nothing if not in constant flux, so this month’s missed shot is next month’s dodged bullet. Readers are still discovering the series every day, and I have lots of opportunities to find them. In the meantime, I’m working on the spin-off series, the second season, and still more content surrounding the universe I’ve built.