We lost another great one. St. Bowie, patron of weirdos, outcasts, oddballs, freaks, and artists everywhere.

I struggled with finding a picture to go with this post. I don’t think the man has taken a bad picture in his life. Whether strutting around on stage in body paint and glitter, or putting fashion week to shame when going for a walk, he had style and presence and performance. Everything he did was art.

As indie authors, we’re told over and over again that our brand is important. Bowie’s brand is Whatever the Fuck He Says It Is This Week. He constantly reinvented himself, right up to the day he went Nova and became something else.

So the pic I settled on is a simple one. An artist whose lack of costume still bespeaks presence in spades. I didn’t want to limit him to the Thin White Duke or the Goblin King. I don’t remember him as Ziggy Stardust or Halloween Jack. My background soundtrack is his 80’s and 90’s stuff, when he was commercial (because fuck those boundaries that say you can be artistic or commercial, but not both). I remember him most as the musician-performer who seemed to be everywhere and nowhere at the same time. So many “stars” seemed the products of careful PR or the whims of fad, while The Man Who Sold The World just kept doing his thing.

Bowie was older than my dad (by 364 days), but he was an inspiration to me from an early age–his music was in the background of my formative years along with the other Titans of the rock scene. In my young teens, he became a crush (because who wouldn’t want a Goblin King at their beck and call, along with a fantastical world you could escape to anytime the mundane one got to be too much). In my maturity, he became an artist to respect because he was always creating, always reinventing himself and his art.

There’s a thread through creative culture’s DNA with his prints all over it, extending into science (fiction) and thinking that set philosophy on its side. And it was always characterized by the strange-eyed Starman who fell to earth and gave voice to every one of us who felt as if we, too, had come here from somewhere else. He showed us we didn’t always have to choose to fit in–we could and should take our weirdness and write it large over everything we did.

The bones of Bowie have left traces of stardust in my own creative efforts. And heaven knows his songs are in my playlists. If you’re writing romance and don’t have “Stay” and/or “Absolute Beginners” somewhere in there, then I don’t know what to tell you. And if you don’t know those songs yet, I’m including them here. Live versions, because this is old skool, and the live performances have so much more magnetism.

This one is from his 2000 concert live at the BBC, and I think the added years put so much more depth and vulnerability to the lyrics than the glossed-up 80’s could. Some things get better with age, and this is one of them. In fact, this whole damn concert is amazing. You can watch it here.

This one is, from all places, the Dinah Shore show. I very vaguely remember this very episode, because Fonzie was on. I know I was very young (because daytime TV), and I had no idea who the yellow-haired guy was who was singing, and it was only decades later that it registered. Back then, I cared about Fonzie and my mother liked Dinah. But as a grown-up, who writes romances, there is a raw, uncertain sexuality to this performance that goes above and beyond the song’s lyrics and the funky beat. And in this case, the younger Bowie’s raw passion is so undeniably compelling that even the piss-poor quality of a 40 year old TV show isn’t enough to dim that magnetism. 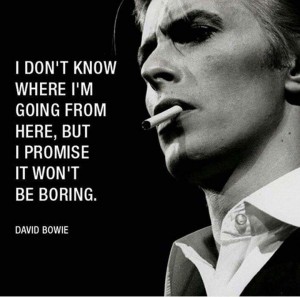 He never apologized for his art. He never waved anybody’s flag but his own. He peeled back the narratives of fame and fantasy and love and desire and showed off their raw beauty, grace, and terrible, damaging power. As an artist, he did exactly what he was supposed to do and showed us the great and terrible beauty of ourselves.

The man who fell to Earth has gone back to the stars. You will be missed.