Scandal: Scions of the Star Empire #1 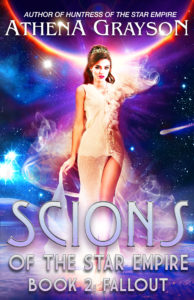 Fallout: Scions of the Star Empire #2

They can have anything they want…except freedom.

The children of Landfall’s powerful nobility have all the wealth and privilege of their family status, but there’s only one thing that will
give them control over their own lives–the title of Scion. The only way to earn it is by carefully managing the social influence markets
that rank them according to their accomplishments. At the exclusive Landfall Cultural Academy, the heirs vie to elevate their status high
enough for the Cultural Trust to grant them the title and the freedom to make their own way. In this elite competition, scandal is as good
as scholarship.

The noble houses of Landfall rule over the entire star system–from the overcrowded city-planet to its pastoral moons and the treacherous
debris belt that prevents them from settling the outer system. But their sons and daughters only have as much personal power and freedom
as their Social Capital numbers grant them. Fortunes are won and lost on the market where Probabilities Brokers wager on their every
move–whether it’s wardrobes of credit-wasting designer fashion, or the scandal of their behavior.